I awoke at 7:30 and then slept until 10:10 when I finally got up.  At 11:00 I was on my run on the main highway heading to the hill town of Flayosc and a lot of it was uphill.  I actually had to stop for a minute which I have rarely done.  On the way back I found a set of car keys in the road and brought them back to the man at the hotel.  It must have been a rental because they had a phone number on them which he could call.

When I got back, I chided Marcia as to whether she had taken advantage of enjoying their wonderful garden.  They were very friendly but this place was nothing special and totally in the middle of nowhere.

At 11:50 we checked out of hotel and by noon we were on our way to check out the little hill town of Flayosc which was only 4 miles away.  Marcia had lunch of a wonderful omelet with ham and cheese and a salad while I had a "cappuccino".  I even snitched some of her omelet.  This plaque on a wall is the letter from De Gaulle from London in June of 1940 to the people of French under Nazi control ["A Tous Les Franï¿½ais" = "To All the French"].

After ambling around town and buying some fruit, at 1:30 we drove the 5 miles east to visit Draguignan.  Before we got into the town we stopped to see the Dolmen Pierre de le Fï¿½e at 1:45.  This dates back to prehistoric times similar to Stonehenge in England.  It is one of the largest in Europe.  This is one of the few things we didn't have to pay for.

The statue (below) is in the entrance and there were modern works for sale in the lobby as below.

There were only a few rooms but they were packed full.

It was pretty eclectic with statues of Pan and old Roman stones.

My favorite was this perfect bust of Napoleon, so I took a shot of both profiles.

They made a reconstruction from one of the skulls that was dug up in the ancient tombs. 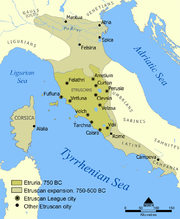 There was a variety of Etruscan artifacts (they were the people in Italy before the Romans; the map shows the extent of their civilization of Etruria in Italy and their twelve regions).

They also had these strange metal amulets from the Roman 2nd Century.

At 2:40 we walked over to see the Eglise (church) St-Michael which has a statue of St. Hermentaire who slew the dragon and saved the town - thus giving the town its name Drahg-een-yon or Dragon.  Another legend says the dragon killed him in the nearby town of Tourtour (city crest, left.)

Below is the statue of St. Hermentaire and with the base housing some of his bones including parts of his sacrum (with the holes).  This is the first time I have seen a statue of Mother Theresa in a Catholic church.  I was also surprised to see a photo of St. Padre Pio, the Italian priest recently made a saint by Pope John Paul II.

At 3:15 we shopped for fruit and I found an electrical store where I bought two EU 3-to-1 extender plugs (white plugs below) which have been very useful.  I can now plug in my Palm, Dima's telephone, computer and battery chargers at the same time.

It was also a surprise to note condom dispensers on the walls of buildings as you walk down the main street.

I didn't have any exact plan as to where we were going next but I knew I wanted back to the sea.  I saw this town on the map called Frï¿½jus which I had never heard of and no one had recommended.  The name sounded vaguely familiar, however (I later remembered it is also the name of the tunnel we took in 1997 to get under the mountain going from Torino, Italy to Lyon on our way to Paris and home.)  We headed south for the 20 mile drive at 4:00 and as we were getting closer to the town we saw these huge smoke columns coming from the woods to the north.  We made a rest stop break and we could see these planes flying overhead to the fires.  A man there told me that this is common this time of year and very dangerous if they don't get them extinguished.  The rest area had this interesting piece of outdoor art.  It looks like a crown of thorns.

Traffic was a little slow getting into town but as we made the bend and drove along the beach I spotted this hotel which I thought might be good.  Marcia parked the car across the street on the beach side and I ran in to check out the prices and availability.  The guy tells me it is ï¿½95/night seaside view and asked if I wanted to see the room.  I already made up my mind but went up and looked at the room anyway.  It was modern with cherry wood hardwood floors and beautiful new fixtures, doors and bathroom.  I walked out on the terrace to sea the beautiful view and yelled to Marcia to start unloading.  This place I liked and it was reasonable $114 a night.  At 4:45 we checked into Hotel Les Palmiers [130 Boulevard de la Libï¿½ration, 83600 Frï¿½jusplage,

We got to the room, unpacked and headed straight to the beach across the street.  By 5:30 we were both swimming and it was refreshingly cool.  I went over to the local beach cafï¿½ and bought two glasses of wine for us and we had them on the sand (note them on the board.)  What a lovely spot for a vacation.

A half hour later we decided to move to the patio area of the place I got the wine, called Le Pagus to enjoy wine while watching the fire planes swooping in 3-5 at a time to scoop up loads of seawater to douse the fires.  They were really hustling, we must have seen them do this 30 times.  It was quite a spectacle.  They often flew right over head.

Here are three of them picking up water at the same time.

Our waiter Paul is from Holland and a frustrated artist (his reflection is in the window).  He took our picture and chatted with us for awhile.  He said he wanted me to see his work and would get me a CD with some of his paintings.

Marcia went back to the room and at 8:00 I strolled the beach sidewalk area where there were many vendors selling their wares.  I bought a bottle of coco rum (ï¿½10) [white bottles in the center] and a surprise gift for Kaylin.

Interesting art work above.  By 8:30 we were strolling along the strand called Frï¿½usplage and made it all the way to the next town of St. Raphaï¿½l.  There were so many places to have dinner it was confusing selecting one, so I let Marcia pick her choice.  All of them were crowded with people sitting at the tables outside.

We split a bottle of Sancerre vin and Eau gaseous and we shared an order of moules ["mules"] (mussels) which it seems just about everybody was eating.  It seems they always come with fries called moules frites.  They were very good.

Marcia had fish soup Provenï¿½ale with Aioli sauce (orange), bread and cheese and then Loup (fish) in cream sauce,...

...while I had l'escargot (snails) followed by magret d'canard (duck breast); both excellent.

I had profiteroles for dessert and we shared an assortment of local French cheeses.

After dinner we strolled back toward the hotel and stopped at Cappuccino & Co. [83600 Frï¿½jusplage] and had the worst Irish coffee I've ever had.  Our waiter Paul from across the street joined us and we wound up paying his tab.

We got back to the room and it was very pleasant working on diarios on the balcony overlooking the sea with a beautiful breeze cooling me off.  This was a fabulous place.

On our way upstairs, the man at the desk told us it was OK to leave the car in the street; that nothing will happen.  I gave up and went to bed at 2:30 AM.

Return to Top of Page

Please Leave Me a Message by clicking the spinning @ sign.